The Australian artist, Georgina Pollard, created an extraordinary art work using biochar and plants as material and Kon-Tiki pyrolysis as a method. A beautiful material reflection on carbon as the core element of life and on random swirling of bonding and breaking down.

Of late, I’ve become obsessed with CO2 and climate change. Too much carbon dioxide. How are we going to get that stuff out of the atmosphere and back into the ground? Googling carbon sequestration brings up numerous methods that various people are developing to capture carbon and one of those methods is biochar. I was very lucky to be invited by Ruy Anaya de la Rosa and Adam Blakester to create an artwork, to be exhibited at the Australia New Zealand 2018 Biochar Conference in Tweed Heads. I was there for three days, surrounded by scientists, farmers, engineers, entrepreneurs, academics and bureaucrats who are all working within similar parameters, but with a diverse range of strategies and goals. I left the experience with my head in a spin and I’m hoping that by writing a series of articles, it will help me untangle all the amazing threads I was given.

I started off on this journey with a very simple idea. The scientists, Ruy, the Starfish CEO, Adam, and I discussed how we wanted an artwork that would be a simple representation of the Biochar for Sustainable Soils (B4SS) project's main objective; to sequester carbon whilst improving the condition of depleted soils by using biochar. I came up with “The Long Sleep” an artwork devised in response to biochar as a method of carbon sequestration as well as a means of improving the ability of soils to hold water and nutrients. The artist statement reads:

“It is an old oak double bed that has been charred in order to preserve and protect it. Within the frame is a bed of biochar, within which life is growing. Wooden household objects such as bowls, cups and toys are charred and lie on top of the bed, nestled in the plant life. 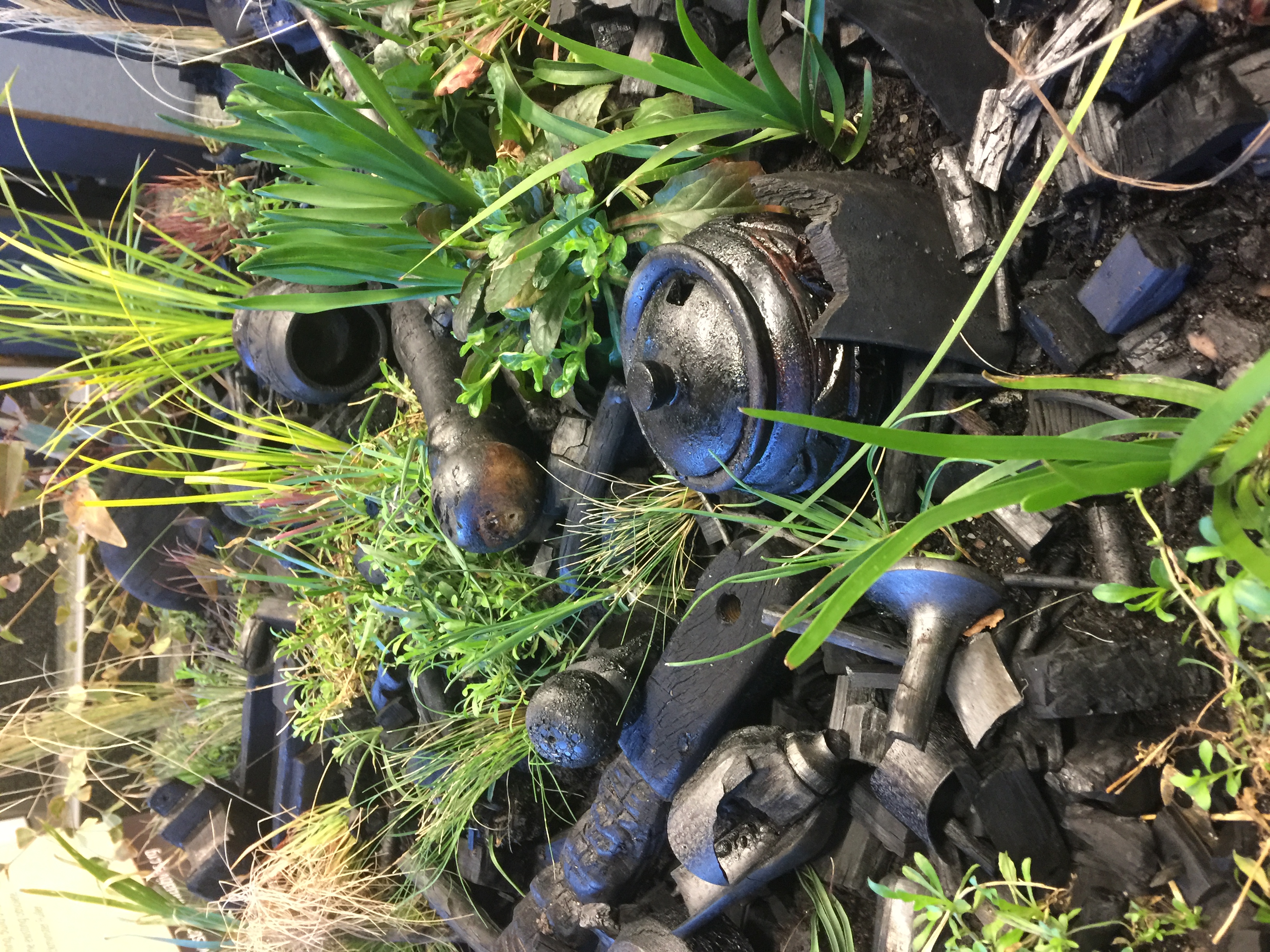 In a similar way that fossil fuels are extracted from a reservoir of biological life that is burnt in an instant, these objects also have a history that locks in what have been destroyed. But wood that has been charred like this has actually been preserved. These objects are now a form of carbon that is stable and can last hundreds of years in the soil, not only sequestering carbon, but also increasing the fertility of the land. Once upon a time, these objects participated in the life that surrounded them. A toy train was played with, a chair sat on. Now, through the process of biochar, we've put the carbon to bed, sequestering and preserving these objects for their long sleep.” 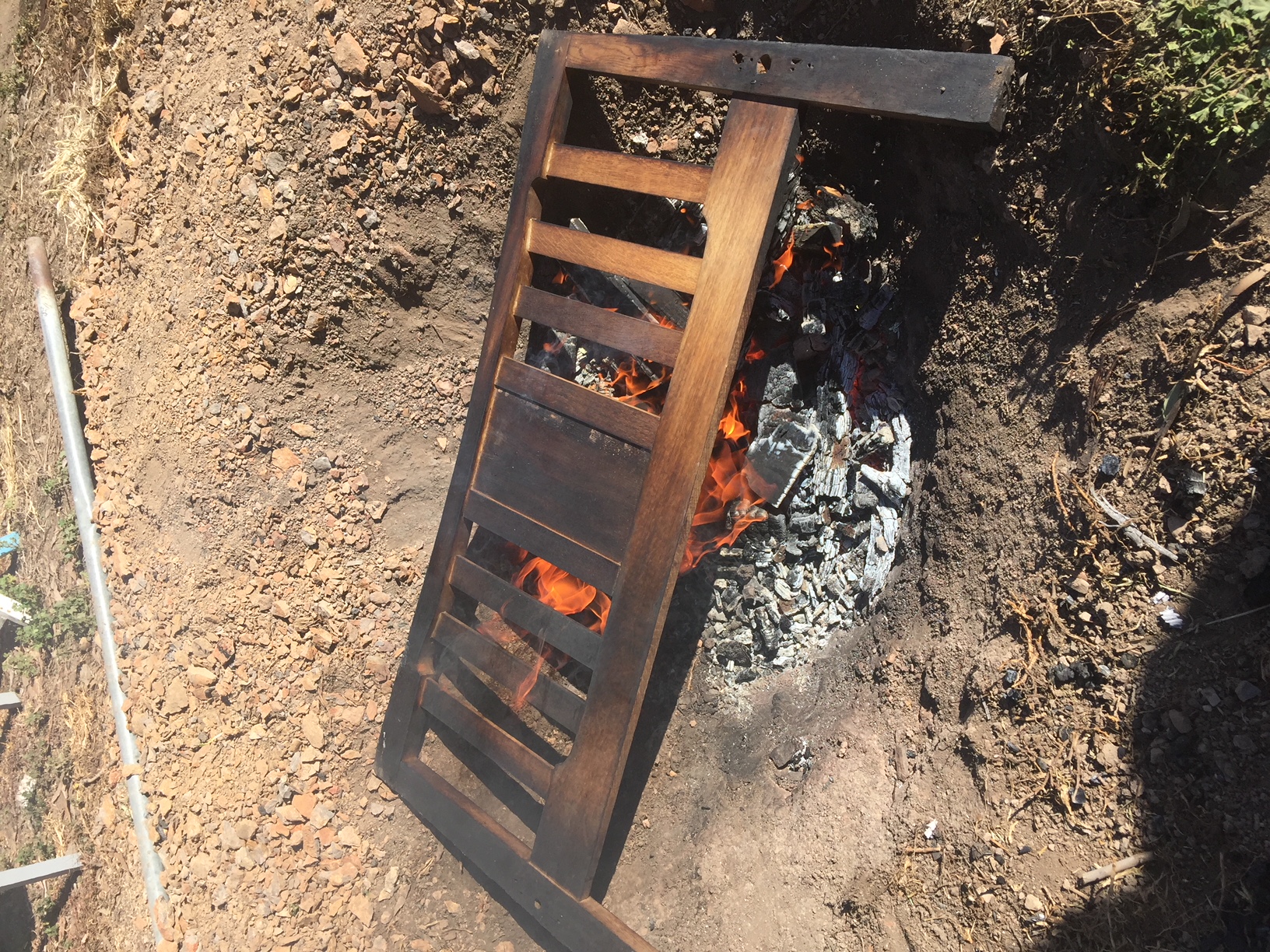 Image: The long sleep bed head in the Kon-Tiki. (photo by Alex Wisser)

When I first partnered with Ruy and Adam to create work around biochar it was a difficult concept to come to terms with. If there is too much carbon dioxide in the atmosphere how can burning stuff be thought of as a solution? There was an initial abhorrence and fear around burning and watching smoke rise and contribute to climate disaster. But carbon is complex and the production of biochar is a counter-intuitive approach to storing carbon. 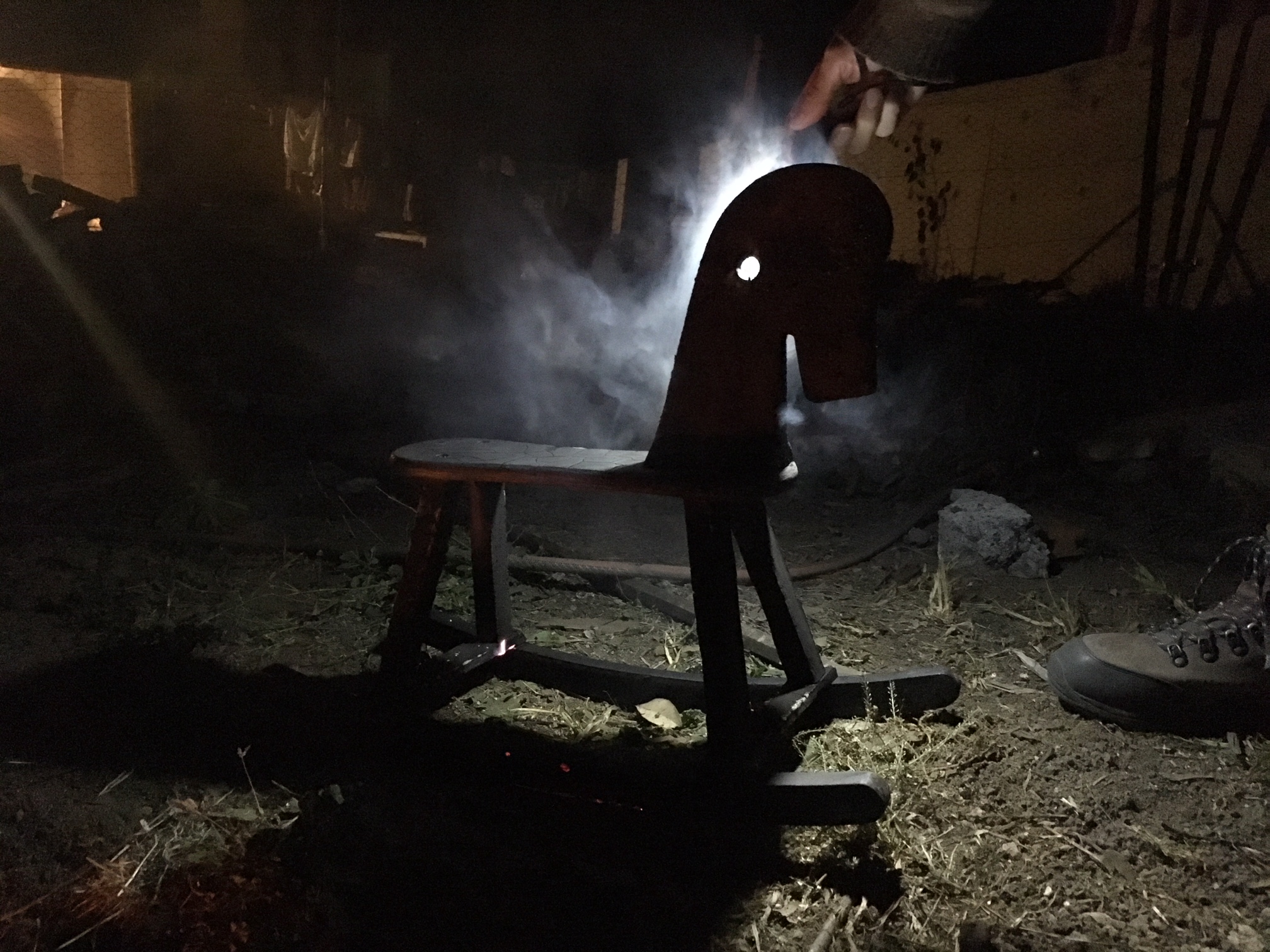 Carbon is an amazing building block of life, it has four electron bonds that connect readily to other carbon atoms as well as many other elements, particularly two common elements oxygen and hydrogen. In the case of methane, the four potential electron bonds available to carbon are taken up by four hydrogen atoms. Cellulose is the arrangement and bonding of carbon, oxygen and hydrogen. In my mind, I see a soup of elements floating around, ready to attach in different ways and create different substances. We all know a water molecule is two hydrogen atoms with one oxygen (H2O) but add carbon atoms and you’ve got carbohydrates. Add nitrogen atoms to the mix and proteins can be formed and proteins can make muscle tissue. A few oxygen atoms together with a carbon and a calcium atom make limestone. I’m not a scientist, so this stuff feels magical to me.

Within the bonds between atoms that make up molecules energy is stored. So the breaking of bonds is necessary too. It’s the usual story, a crazy cycle of creation and destruction. Life builds using these basic building blocks, adding a random element here and there for diversity, fun and beauty. But then some other form of life comes in and eats it, or destroys it in some way, releasing the energy that is necessary for life. Maybe fire rips through forests or perhaps numerous volcanoes erupt and mass extinctions follow. All random: Composition and decomposition. 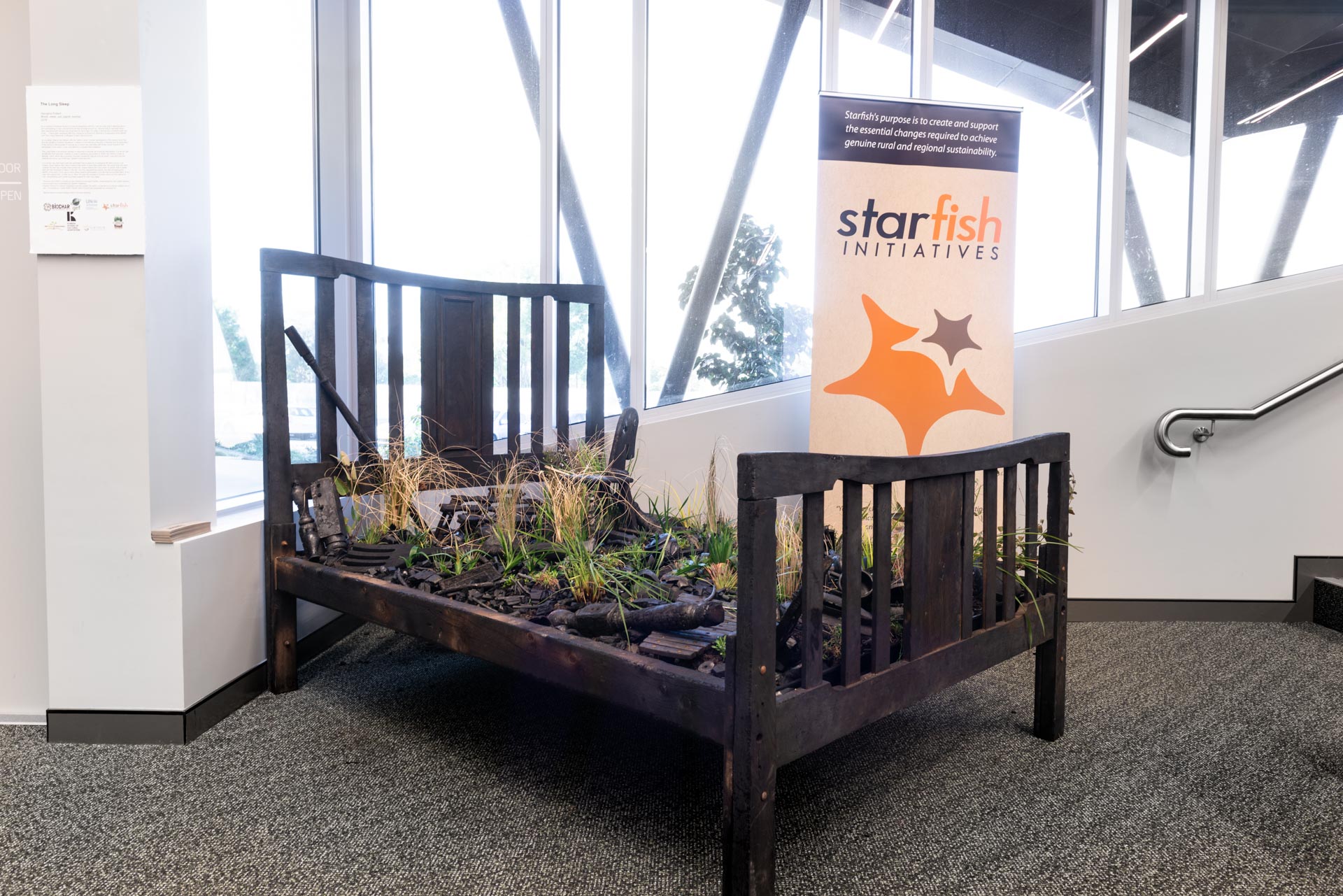 The narrative thread I want to pull out of this random swirling of bonding and breaking down of atoms is the relationship of carbon to climate change. Carbon feels like the antagonist in the climate change disaster story as we race to get excess carbon out of the atmosphere and into the ground. Carbon however, has its own journey around the planet that can be defined in two different timescales. The short-term carbon cycle is comprehensible on a human scale, the growth of trees, the lifetime of a bird. But the long-term carbon cycle is on a geological timescale, the life of the planet.

How does carbon travel through the short-term carbon cycle? Carbon is pulled out of the air by plants that with the help of sunlight create organic matter. Whether that green leaf is eaten or the sugars go on to build cell walls in the trunk of a tree, one way or another decomposition is a given. Leaves fall to the ground and are decomposed by soil organisms. Birds, bacteria, humans or giraffes, we all produce carbon dioxide (CO2) and methane (CH4) as we participate in that process of decomposition. Your compost heap, your backyard worm farm, your breath. You are connected to that carbon cycle. Stand next to a tree, breath in the oxygen it creates. Breath out carbon dioxide, the tree loves you as you exchange carbon dioxide for oxygen in this short-term carbon cycle. 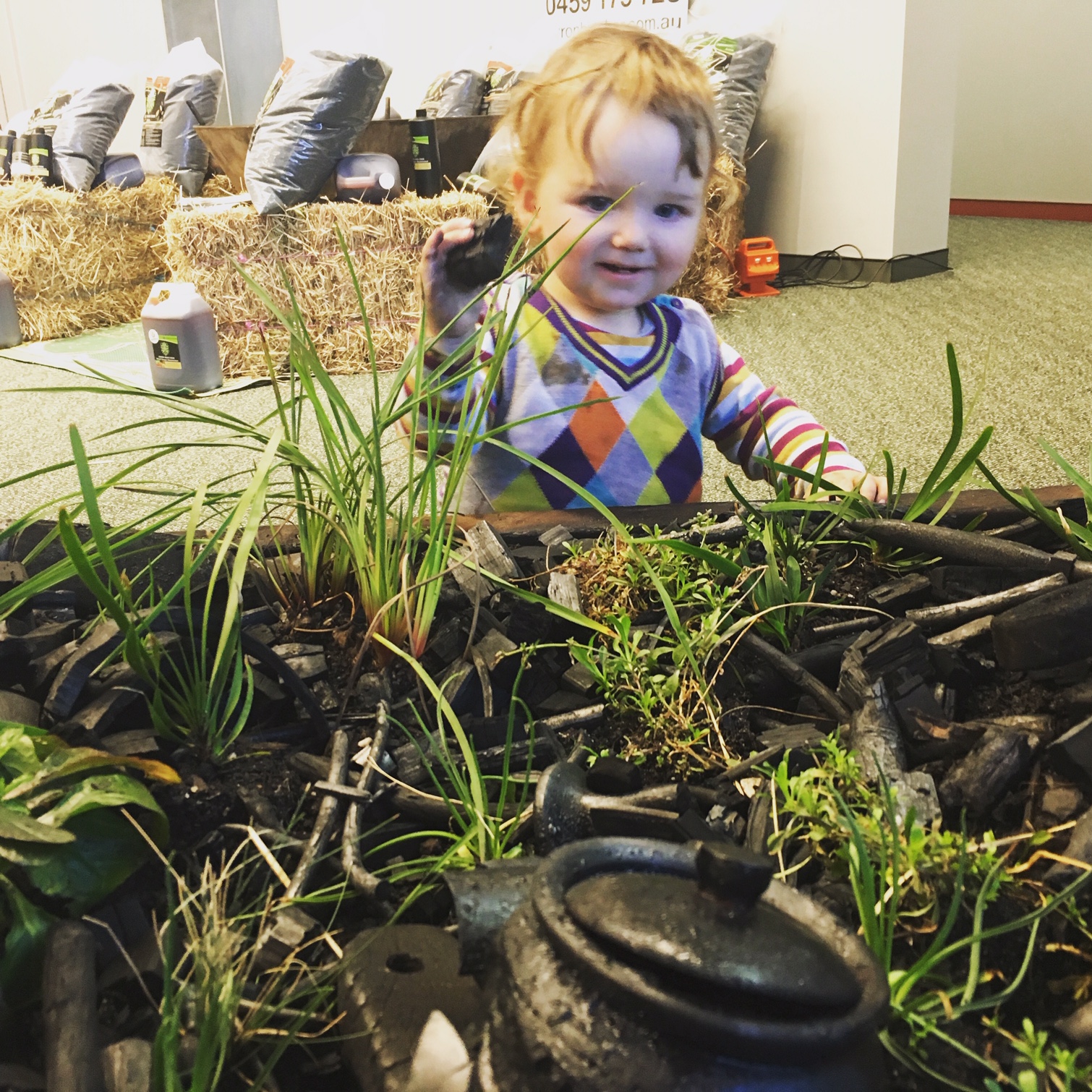 The tree may love you, but the planet couldn’t care less. The geological timescale that is the long-term carbon cycle is indifferent to the mortals crawling on its crust. Mountains rise and fall, volcanoes and earthquakes either spew up CO2 or suck it up as the earth’s crust shifts and nestles into a comfortable orbit around the sun. There have been five mass extinctions over the life of the planet as far as we know. Those millions of species from the ages that have passed are buried as sediment rock slowly settles on the death of plants and animals, crushing it, heating it, creating crude oil, coal or natural gas.  Limestone is the layering of carbon and oxygen with the calcium from seashells as sediment layers over the top. Heat is created when molecular bonds are broken with the crushing weight of rock and oceans, the elements rearrange from seashells to limestone. In the short-term cycle, carbon is stored in forests, soils and oceans. In this long-term cycle, carbon is stored in rocks and these reservoirs of the earth’s crust, created over millions of years.

Climate Change is the product of human interaction with this long-term cycle. Sure, our breath contributes to the production of greenhouse gases within the short-term carbon cycle, but it’s our interaction with the long-term carbon cycle that is producing global warming. A tree can live for 50 years or maybe a couple of thousand years, but fossil fuels were laid down around 300 million years ago and we are burning them in an instant. It is the incommensurability of these time scales that is warming the planet and it is ridiculously unsustainable. It’s most likely that all of the mass extinctions have had a relationship with carbon dioxide one way or the other, either too much CO2 heating the planet or too little provoking the ice age.

It doesn’t take much to become overwhelmed by the immensity of this problem. But it was heartening to sit amongst people who were tackling this issue; looking for solutions to our reliance on fossil fuels. Coal isn’t just about energy production. In order to make solar panels and wind farms we need steel and steel-making requires coal. Food production relies heavily on fossil fuels to make fertilizers. We need food, but whilst producing meat and composting green waste we are producing carbon dioxide and methane. We need to get carbon back into the ground in a stable form. Biochar sits within these problems and more.

To read more about this biochar project and creative work that reaches beyond the familiar contexts of art to investigate new ways of acting in the world, have a look to the excellent website of the KSCA platform for artists and others who are experimenting with adaptive cultural change. And especially see the inspiring video about the students at Bingara Central School exploring Carbon from the point of view of art, science and farming. If all students would have this type of practical are and science lecture, climate change could still be avoided.

This work and B4SS was funded by the Global Environment Facility, implemented by the United Nations Environment and coordinated by Starfish Initiatives. The work is part of the project "An artist, a farmer and a scientist walk into a bar..." which is funded by Create NSW through its regional partnership scheme. It is a partnership between Kandos School of Cultural Adaptation, the Living Classroom (Gwydir Shire Council) and Cementa Inc. Special thanks to Brett Nutting AdHoc Furniture Kandos 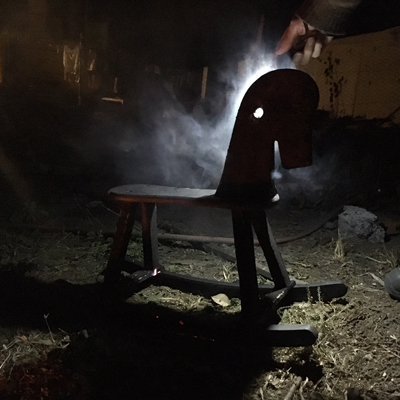 Georgina Pollard is an artist who lives and works in Kandos, in regional New South Wales (Australia). She has a background in theatre and painting, and has participated in artist self-organizing initiatives, having founded and directed independant gallery spaces and a regional arts festival. Georgina divides her time now between raising a small child and a teenager, painting and drawing, and working with Kandos School of Cultural Adaptation.