Biochar and PyCCS included as negative emission technology by the IPCC

Biochar was included for the first time as a promising negative emission technology (NET) in the new IPCC special report published on 8th October 2018. While the special report’s overall message was alarming, the inclusion of biochar is an important milestone for mitigating climate change and fostering research on pyrogenic carbon. Since the EU is obliged to fund research in negative emission technologies due to the Paris Agreement, it can be expected that biochar research and development will start to receive more important funding in the near term. We provide here a short summary on pyrogenic carbon capture and storage (PyCCS) and relevant excerpts from the new IPCC special report with regards to PyCCS and biochar.

To keep global temperatures in the range that has sustained civilization during the past millennia (“1.5°C threshold"), the carbon balance between emissions to the atmosphere and carbon accumulation in the terrestrial system has to return to an equilibrium by 2050 at the latest (Obersteiner et al., 2018; Rockström et al., 2009, 2016). To achieve this, greenhouse gas (GHG) emissions need to be reduced by at least 90% with the world economy becoming climate neutral by 2050 (Bertram et al., 2015; Rogelj et al., 2015; Sanderson et al., 2016; Schleussner et al., 2016). However, even if the most ambitious scenarios of global GHG emission reductions were implemented within this timeframe, the additional need for large-scale atmospheric carbon dioxide removal (CDR) to prevent overshooting the 1.5°C temperature threshold remains (Boysen et al., 2016a; Hansen et al., 2017; Smith et al., 2015). Thus, most recent climate mitigation scenarios include the large-scale deployment of so-called negative emissions technologies (NETs) (Fuss et al., 2014; Riahi et al., 2015; Rogelj et al., 2015; van Vuuren et al., 2013).

Technical solutions to extract CO2 from the atmosphere including direct air capture (Kumar et al., 2015; Sanz-Pérez et al., 2016), enhanced weathering (Koeve et al., 2017; Moosdorf et al., 2014) and artificial ocean alkalinization (Montserrat et al., 2017) are promising geoengineering approaches. However they are, to different degrees, either not yet mature or available at the needed scale; or the risk of large scale implementation may still be considered too high (Hansen et al., 2017). Thus, despite technological progress, photosynthesis in green plants, algae and other organisms is still the most efficient method to extract CO2 from the atmosphere. An increase of terrestrial and marine biomass production, combined where possible with the sequestration of a significant part of its accumulated carbon, is therefore considered the carbon dioxide removal strategy that may be implemented the most rapidly, and with the lowest risk for other geological and ecological processes (Hansen et al., 2017; Rockström et al., 2017; Smith et al., 2015).

Apart from afforestation, bioenergy production with carbon capture and storage (BECCS) was the only NET included in the mitigation scenarios of the Intergovernmental Panel on Climate Change’s (IPCC) Fifth Assessment Report (Allen et al., 2014). The BECCS scenario anticipates that biomass combustion could become a major pathway for clean energy production and that capturing and storing the emitted CO2 would become a synergistic technology. Besides the known and unknown risks of geological storage of CO2 and its high costs (>150 USD per t CO2; (Klein et al., 2014; Smith et al., 2015), BECCS is increasingly being recognized as potentially harmful to ecosystem services and the integrity of the biosphere if implemented at scale (Boysen et al., 2016b; Burns & Nicholson, 2017; Heck et al., 2018).

Alternatively, carbon dioxide removal could be achieved through increased biomass production in the terrestrial system, combined with the extension of the mean residence time (MRT) of the biogenic carbon (i.e. net C sequestration) (Erb et al., 2017; Smith et al., 2015). Increasing soil organic matter is one way forward to extend MRTs (Lal, 2011; Minasny et al., 2017a; Zomer et al., 2017). However, the capacity of soils to accumulate organic carbon is likely limited  (Barré et al., 2017; Minasny et al., 2017b) and may require large amounts of nitrogen (van Groenigen et al., 2017). Maintaining increased soil organic matter (SOM) stocks will depend on agronomic methods and may be further hampered by the effects of climate change (Sierra et al., 2015). Also, the dynamics of SOM are far from being understood on a chemical/molecular level (Lehmann & Kleber, 2015). The MRT of SOM is 50 to 80 years at maximum (Schmidt et al., 2011; Wang & Chang, 2001). Thus, increasing SOM is clearly an important CDR with extensive ecological co-benefits; however, its long-term potential may not be sufficient as the sole CDR technology (Boysen et al., 2016a; Smith et al., 2015; Soussana et al., 2017). Moreover, the conversion of plant residues (shoots, roots, and root-derived C) into SOM has low C-efficiencies of 10 – 15% (Bolinder et al., 1999) not considering that there might be SOM saturation levels where soils cannot accumulate and hold more organic carbon (Six & Jastrow, 2002). A complementary way forward to extend the MRT of biogenic C in the terrestrial system and to increase C-efficiencies is the pyrolytic treatment of biomass with subsequent sequestration in the bio-, geo-, and anthroposphere.

During the pyrolysis processes, shredded biomass is heated under an oxygen-deficient atmosphere to temperatures between 350 and 900°C (EBC, 2012) converting the biomass into a solid (biochar), a liquid (bio-oil) and a permanent pyrogas fraction. In most current pyrolysis systems, the pyrolysis liquids and gases are combusted for the production of thermal and electric energy releasing the carbon as GHG back into the atmosphere. While this is often considered carbon neutral, i.e. “green energy” because it is made from biomass, it can only sequester the biochar carbon, not the carbon from the gaseous and liquid phases which represents more than half of the initial biomass carbon. To optimize the carbon sequestration potential, using all pyrogenic carbon co-products (i.e. solid, liquid, gaseous) is crucial.

In a recent publication, Schmidt et al. (2018) demonstrated that pyrolytic carbon capture and storage (PyCCS) can attain carbon sequestration efficiencies of >70%, an important threshold to allow PyCCS to become a relevant negative emission technology. Prolonged residence times of pyrogenic carbon can be generated

While pathway (3) would require major carbon taxes, negative-emission credits or similar governmental incentives to become a realistic option; pathways (1) and (2) create added economic value and could at least partly be implemented without other financial incentives.

Pyrolysis technology is already well established in many countries and industrial set-ups. Biochar and bio-oil sequestration in soils or bio-materials, do not present ecological hazards when produced and controlled properly. Global scale-up appears feasible within a timeframe of 10 to 30 years. Thus, PyCCS could evolve into a decisive tool for global carbon governance, supporting both climate change mitigation and the sustainable development goals simultaneously.

IPCC passages on biochar and PyCCS

In the 15th IPCC special report on Global Warming of 1.5 °C (http://www.ipcc.ch/report/sr15/), biochar and pyrogenic carbon capture and storage are, for the first time, cited and credited as promising negative emission technology. While in the Summary for Policymakers biochar is not explicitly mentioned, soil carbon sequestration was included:

In the extended report, biochar appears in the following sections:

There are also synergies between the various uses of land, which are not reflected in the depicted pathways. Trees can grow on agricultural land (Zomer et al., 2016) and harvested wood can be used with BECCS and pyrolysis systems (Werner et al., 2018). The pathways show a very substantial land demand for the two CDR measures combined, up to the magnitude of the current global cropland area.

The PyCCS terminology was not yet cited as such in the main text. However, the newer and extremely important strategy of including bio-oil and pyrolysis gases into sequestration scenarios was mentioned in a footnote in the biochar section:

On the whole, the attention paid by the IPCC to pyrogenic carbon capture and storage (PyCCS) is marginal considering that no other negative emission technology is ready to scale-up, is economically more favorable or has comparable positive side effects on ecosystem services, agriculture and food security. However, considering the complex procedures involved in editing the IPCC reports, the inclusion of biochar is an important step forward to prepare the ground for the development of PyCCS as a key global climate technology. It is important to keep in mind that, although more than 10,000 scientific publications have been written on special aspects of biochar, bio-oil and pyrolysis, relatively few articles interlink their research with the science of  climate change science to be found at the core of IPCC reports and are thus poorly received by climate science experts. Just to give an example: While 88 scientific publications were summarized in Borchard et al. (2019) showing that the field application of biochar led to an average reduction of agricultural N2O emission by 38%, non of the currently used assessment models of global GHG emissions is programmed to include such information and thus they cannot be processed within the framework of the IPCC. Agricultural and land management systems become extremely complex to model once carbon farming systems start to replace agro-chemistry based monocultures.

However, it can be expected that by the time of the next IPCC report, PyCCS will already be more broadly founded in peer reviewed literature. The good news for now is that the first step has been made to include biochar and PyCCS in the climate mitigation discussion by the world’s leading scientific community. 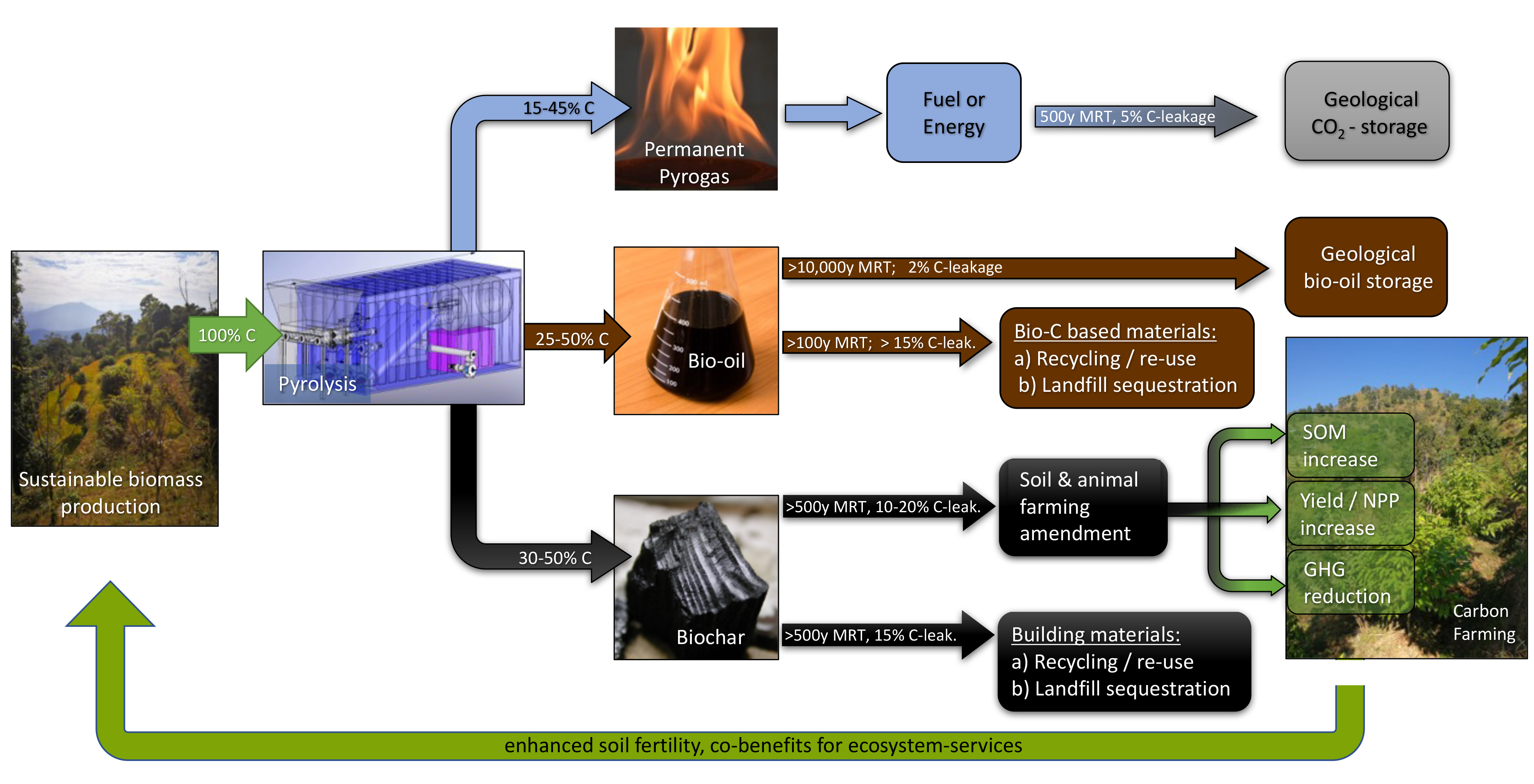 Figure 1: General PyCCS scheme for pyrolytical treatment of biomass, the pathways of solid, liquid, and gaseous products, their use and sequestration scenarios, the respective C-leakage rates, and the circular effect on carbon farming systems and sustainable biomass production. 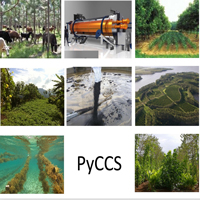 Biochar and PyCCS included as negative emission technology by the IPCC

Biochar papers cited in the IPCC special report:
(all are open access)