How Biochar Can Improve Sustainability for Coffee Cultivation and Processing

by Kathleen Draper and Thayer Tomlinson

As the security of coffee supply is threatened by various climate and environmentally induced pressures, a focus on more sustainable coffee production is gaining increased attention in many areas of the world. At the same time that coffee production is under pressure from climate change impacts, coffee cultivation itself leads to greenhouse gas (GHG) emissions, contributing to climate change.  A new white paper entitled Potential for Biochar to Deliver Greater Sustainability for Coffee Cultivation and Processing co-authored by the Ithaka Institute for Carbon Intelligence (Ithaka) and the International Biochar Initiative (IBI) highlights how to improve yields and reduce costs while reducing carbon intensity.

As the security of the coffee supply is threatened by various climate and environmentally induced pressures, a focus on more sustainable coffee production is gaining increased attention in many areas of the world. At the same time that coffee production is under pressure from climate change impacts, coffee cultivation itself leads to greenhouse gas (GHG) emissions, contributing to climate change. With more and more consumers shifting their buying habits to support products with lower climate and ecosystem impacts, coffee supply chain participants are increasingly seeking ways to reduce their carbon footprint and improve the sustainability of their overall growing and processing practices.

Organizations such as the Rainforest Alliance, UTZ, 4C Association, and others have developed sustainable coffee certification programs which help to educate coffee farmers and monitor overall operations and implementation of sustainable management practices. To date none of these certification programs have included the use of biochar as a sustainable strategy to provide improved crop productivity and residue management as well as a tool for both climate change adaptation and mitigation. Biochar is a solid material obtained from the thermochemical conversion of biomass in an oxygen-limited environment. Biochar can be used as a product itself or as an ingredient within a blended product, as an agent for soil improvement, improved resource use efficiency, remediation and/or protection against particular environmental pollution, and as an avenue for greenhouse gas (GHG) mitigation (IBI, 2013).

This paper reviews some ways that biochar can be incorporated into coffee production and processing systems to improve their overall economic and environmental impacts, with a focus on those processes typically performed at or near the site of coffee cultivation. It includes the potential benefits of adding biochar to soils to improve soil fertility and related increases in yields; highlights opportunities for optimizing the use of coffee residues as potential feedstocks for biochar; and showcases de-carbonization pathways using biochar for the coffee industry.

The methodology used in this paper combines a synopsis of relevant peer-reviewed literature with the identification and analysis of some historical, current, and planned coffee and biochar demonstration projects in various coffee growing regions around the world. The authors interviewed several project teams on different continents and include project descriptions which outline results to date and other details from field trials using biochar.

Although promising early results from projects using biochar at coffee cultivation sites were discovered in the process of writing this paper, the use of biochar in coffee cultivation is fairly new and peer reviewed scientific publications are lacking. Recommendations for future research are highlighted in the Next Steps section including creating standardized Cost/Benefit Analysis (CBA) approaches to better quantify the benefits of biochar use in coffee production and processing. Along with a standardized CBA, possible carbon reductions from biochar use could be quantified to support potential project financing mechanisms.

The authors recommend increased coordination between existing coffee and biochar projects to share information and identify and develop additional demonstration projects. If these demonstration projects used a similar method for trial design, best practices could be more easily understood and shared. Finally, although there are numerous coffee residues which could serve as feedstock for biochar, further research on the specific characteristics of the resulting biochars is needed.

Global agricultural operations are increasingly impacted by erratic weather patterns attributed to climate change. Coffee, one of the most highly traded agricultural commodities in the world, is an example of a crop which could be negatively impacted by climate variability, potentially leading to increased fluctuations in yield and price.

Not only does coffee bring pleasure to millions on a daily basis, it also provides a livelihood for more than 25 million coffee producers, 80 percent of whom are smallholder farmers cultivating fewer than five hectares (Fairtrade Foundation, 2012). These smallholders rarely have access to improved farming techniques and adaptation technologies, rendering their livelihoods at risk due to predicted negative climate effects which expose both the coffee farmer as well as those companies selling the product to high levels of risk. A decrease in yield for these farmers can be catastrophic, causing them to abandon farming altogether or, as in the case of some coffee laborers from Central America, to seek work outside the coffee sector (Edgerton et al, 2013). In some areas, greater prevalence of extreme weather events is causing topsoil loss through erosion, while in other areas droughts are increasing the need for expensive irrigation systems. Warmer average temperatures strain coffee production in traditional coffee growing regions and have resulted in more pests and pathogens which were previously unable to withstand cooler temperatures (Union of Concerned Scientists, 2014). Many coffee growing regions have seen significant yield losses in the past few years due to coffee leaf rust (Hemileia vastatrix), a parasitic fungus which lowers yield and can eventually kill coffee plants. Central America alone suffered damages of close to USD$500 million (approximately 2.7 million bags of lost production) from coffee rust in 2012 –2013 (International Coffee Organization Annual Report, 2012/13).

Although there are increasing efforts to move towards more sustainable production methods, coffee, like many agricultural crops, can have a substantial carbon footprint due to input requirements of fertilizer, energy, and water from cultivation to cup. In some growing regions, there is a growing use of pesticides to control the coffee berry borer (Hypothenemus hamperi) and coffee leaf rust as well as increasing use of fertilizers (United Nations, 2004) to boost yields in nutrient poor soils, all of which can have negative environmental and human health impacts. In addition, the untreated release or burning of coffee residues can cause air and water pollution and is a source of GHG emissions (Coltro et al, 2006). Some coffee producing regions use few to no chemical inputs for crop growth and depend less on pesticides, but could take advantage of biochar for increased crop growth, soil health, and to reduce GHG emissions.

More and more consumers are seeking sustainably produced agricultural products. To meet this demand, a wide range of certification programs have arisen that require implementation of best management practices in social and environmental realms for coffee cultivation. Certification programs may be run by independent third parties (e.g. Bird Friendly, Rainforest Alliance, Organic, Max Havelaar, Fair Trade, UTZ Certified, 4C, etc.) or individual coffee companies (e.g. Starbucks and Nespresso). Several of these programs require farmers to pay for certification, auditing, and investments in new technologies to meet various standards, and these costs may not necessarily be entirely offset by increased revenues. However, many of the environmental and social benefits from the programs are seen as beneficial by not only consumers but coffee farmers and communities, and increased premiums or buyer retention for certified coffee can give growers an incentive for investing in the coffee farming communities (Taylor, 2007). Those certification programs that also promote or result in positive impacts on yield may be more attractive to growers (Barham et al, 2011).

The complete whitepaper can be accessed by subscribers of the Biochar Journal only. 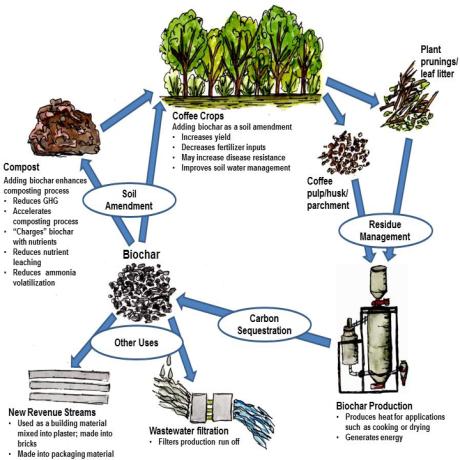 How Biochar Can Improve Sustainability for Coffee Cultivation and Processing

by Kathleen Draper and Thayer Tomlinson

Kathleen Draper is the US Director of the Ithaka Institute. The Ithaka Institute for Carbon Intelligence, which was founded in Valais, Switzerland, with its American branch in an office in Rochester, NY, is dedicated to research, education, and consulting related to closed loop biochar solutions which can be implemented in both the developing and developed world. They are the editors of the Biochar Journal and the developers of the Kon-Tiki Kiln, biochar plasters, and sustainable packaging made from biochar.

Thayer Tomlinson is the Communications Director for the International Biochar Initiative. IBI is a non-profit organization that promotes good industry practices, stakeholder collaboration, and environmental and ethical standards to foster economically viable biochar systems that are safe and effective for use in soil and as a climate mitigation tool.