The effect a wine cellar’s climate has on the quality and complexity of a wine has up to now been greatly underestimated. Only now are we beginning to realise that decisive factors for a good wine are not just temperature, but also humidity. As a result, the Delinat Institute has developed a new form of plaster made of biochar and clay, with which an optimal cellar climate for the production of natural wines can be achieved.

A wine contains up to 1000 different substances, though their individual functions are by no way completely known. Why does a vine take the trouble to produce such an enormous chemical library in every grape? And what happens with all those molecules between harvesting the grapes and filling the wine into bottles?
Even if we take into serious account the unknown panoply of molecules in the wine, wine is not just a composition of organic-chemical formulas and minerals, but a living elixir. We should not forget that most of the organic molecules in wine have been degraded, converted and made more complex through the activity of yeasts, bacteria and enzymes. Wine is the result of not just chemical, but also biological processes. And that’s what makes each wine unique.
When making wine naturally, a large proportion of the yeasts and bacteria responsible for converting the grape juice to wine are transported from the vineyard to the cellar on the skins of the grapes and in the grapes themselves. And this is one of the main reasons why the promotion of biodiversity and the avoidance of synthetic and biological pesticides play such a decisive role in determining the quality of a wine. The yeast and bacteria flora are essential elements of the terroir, responsible not just for fermenting the sugar to wine but also for providing the enormous complexity and wide range of different aromas of each wine. At least on account of this role, they need to be protected.

The influence of cellar climate on natural wine making

The microorganisms entering the cellar together with the grapes are all too often a minority species in the cellar. This is because spores and microorganisms from past wine-making seasons are to be found on the walls and floor of the cellar and on all vats and tools. As soon as the fresh grape juice is poured into the vats, these spores and microorganisms reawaken and immediately start work on unchecked proliferation, encroaching on the “Lebensraum” of the still “inexperienced” yeasts and bacteria fresh from the vineyard.
Anyone wanting to make a natural wine and unwilling to have recourse to selected yeasts must therefore take utmost care to preserve the microbial flora, not just in the vineyard but also in the cellar. Each wine cellar has its own microbial flora. And these exercise the same amount of influence on a natural wine as the famed terroir on which the grapes are grown. This is basically no different to those traditional cheese dairies which, when moving premises, wash down the walls of the old diary and then daub the washing water on the walls of the new dairy, thus taking with them their old and trusted microbial flora.

We will find on the walls, vats and machines of a wine cellar not only the desired yeasts and bacteria, but also countless other more or less useful, neutral or harmful microbes and spores. One of the main worries here are the countless species of moulds such as penicillium, cladosporium or alternaria. These moulds are a danger not just to the wine on account of their metabolites, the so-called mycotoxins, but also to the health of the people working in the cellar.
Black, blue, green, white and orange moulds, invisible to the naked eye, can develop, especially when high humidity levels lead to condensation on the walls and vats. To prevent this, high humidity levels and temperature fluctuations must be avoided at all costs in the cellar. However, instead of making sure that the cellar has an optimal climate with a humidity level of 60 – 75%, many cellars rely on sterilising substances, the effect of which is often unsatisfactory as they kill off not just the harmful but also the beneficial microbial flora, as well as contaminating the cellar with often questionable chemical substances.

The last 50 years have seen cement-based materials used for building new and modernising traditional cellars. The surfaces have then been sealed with washable paint or tiles. The result might be pleasing from a hygiene perspective, but it is fatal for the microbial flora in the cellar. The sealing of walls and floors and the use of cement-based plaster means that the cellar walls are no longer able to breathe and can hardly adsorb any moisture. After hosing down the cellar or after lowering the temperature by a few degrees, condensation occurs on the walls, leading in just a few days to the sporulation of various species of mould.

The use of biochar-clay plaster in cellar refurbishment

To achieve a cellar climate best promoting the natural microbial flora that have made their way into the cellar from the vineyard, tests were made at the Delinat Institute on ways of restoring and refurbishing wine cellars in a sustainable manner. One of the main project aspects involved the development of a plaster based on biochar and clay. A new method of application saw the walls of an old Valais wine cellar being sprayed with a 10 cm thick layer of the new biochar-clay plaster (see photo). This massive wall coating provides not only good thermal insulation and consequently fewer temperature fluctuations, but is also a great humidity regulator. 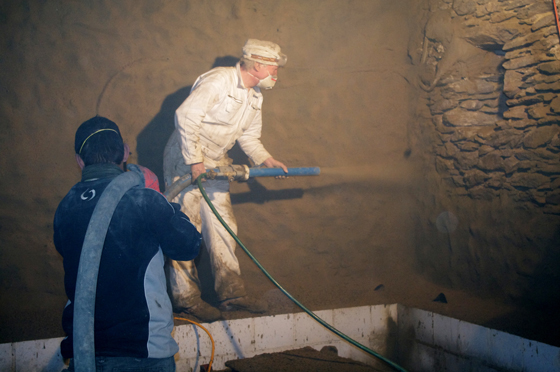 Jet-spraying the cellar's rough stone wall with the biochar-clay mixture.

In combination with the right ventilation, the machine-sprayed plaster made of clay and biochar is able to keep cellar humidity levels at a constant 60 – 80% throughout the year, thus preventing or at least greatly reducing the development of mould and other harmful microbes. At higher humidity levels, the walls quickly adsorb moisture, returning it to the room just as quickly when humidity levels drop. While too high a level of humidity promotes the development of harmful microbes, too low a level is also not beneficial, as it leads to particulate pollution, electrostatic charging of the air and the evaporation of wine in wooden barrels.
The biochar-clay layer of plaster acts as a moisture storage buffer, whereby the capability to adsorb water is dependent on the thickness and quality of the biochar-clay plaster. When high doses of moisture regularly reach the cellar through the earth or by hosing down the cellar, even this buffer will at some stage reach its capacity. This means that the cellar also needs a good natural source of ventilation.

The ingredients of the biochar-clay plaster

To make the spray plaster, 30 – 50% biochar is mixed into the clay, to which a certain amount of sand has been added (compared with normal clay plasters, the sand content is slightly lower). The biochar-clay mixture thus contains 50% biochar, 30% sand and 20% clay. This mixture can also be used as an intermediate layer of plaster, whereby the biochar is ground to less than 5 mm particle size. The result is an anthracite-coloured plaster with a very noble, slightly shimmering appearance. Should a lighter colour be desired, the share of finely ground biochar is reduced to 10-20% for the top layer, and clay-based paint applied as the final coating. No problems have been encountered either with applying the plaster or with its hardening. Compared to lime- or cement-based plasters, the biochar-clay mixture is even beneficial for the hands of the building workers, meaning that gloves and protective clothing are not needed.
It is intended to bring a range of biochar-clay plasters to the market by mid-2013. Up till then, the focus will be on optimising the mixtures and conducting a series of measurements with regard to final solidness, thermal conductivity and water storage capacity.
Biochar can just as well be mixed into conventional lime- or cement-based plasters in equal proportions. In doing so, the biochar can help increase their insulation and water storage capacities. The same applies to rendering. However for plaster, clay is the recommended basic material for achieving an optimal indoor climate.

After applying the intermediate layer of plaster, the biochar gives the plaster an anthracite colour with a slightly shimmering appearance. After the final layer of plaster has been applied, clay-based paints can be used as final coating.

Thanks to its huge surface and porosity, the biochar in the clay plaster helps to adsorb contaminants, spores and mycotoxins as well as helping to bind the gases produced during vinification. The latter aspect means that the moulds and other bacteria lose their feeding grounds. Optimal humidity and the binding of toxins are perfect for promoting healthy microbial flora in the cellar, protecting the wine against sensory deficits. The experience gained in the first winter season in the Valais test cellar shows that the humidity levels have remained constant at 65 – 75%.
The spraying method developed together with the German company, Casadobe, for applying thick layers of biochar-clay plaster can be used both for restoring old cellars and also for refurbishing modern concrete cellars. And of course it can be used for the construction of new cellars. Through the experience gained in this first refurbishment project (to be continued in the coming year with scientific measurements of cellar flora and indoor climate) we hope to have come up with a natural way of optimising a cellar’s climate.

Biochar-clay plaster for use in homes

The biochar-clay plaster technology developed by the Ithaka Institute to refurbish wine cellars can also be used for other enclosed spaces, such as food stores, animal housing, warehouses or even houses and offices. Optimal humidity levels have a major influence on the well-being and health of the inhabitants of houses and offices. A humidity level below 40% can lead to dry mucous membranes, in turn increasing the risk of colds, asthma and allergies. Similarly, a humidity level above 70% in closed living spaces results in increased exposure to mould spores. Applying just a 2 cm layer of biochar-clay plaster can noticeably improve a room’s climate. Two Valais houses have already been restored using biochar plaster. First experiences with indoor use have proved to be extremely promising.
If biochar-clay is used as construction material for plaster, insulation or bricks, buildings could partially be recycled after some hundred years as a soil conditioner instead of becoming hazardous waste.

PS.: Biochar-clay plasters also have a shielding effect with regard to electromagnetic radiation (“electrosmog”). This means that we have no GSM reception in the test cellar, a further positive feature allowing us at least there to fully concentrate on working with nature. 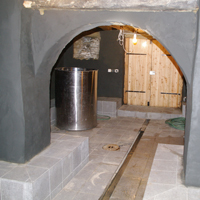 The article was originaly published in the Ithaka Journal and only internaly reviewed.

What is it worth for you that this article exists? Please help us with a yearly subscription to make the Biochar Journal possible. Subscribe !