For a long time biochar science was too much focused on sequestering carbon just by digging biochar into soil. Though if that would be the main objective, it would be more efficient to sink wood and other biomass deep onto the floor of the ocean where 100% of the biomass carbon would be conserved for millenia.

When the English sunk the Spanish Armada in 1588, they created one of the biggest single manmade carbon sinks of Europe with no effect on the climate. However, at about the same time both Americas became densely covered with endless forests as both Spanish and English colonialists brought infectious diseases killing more than 90% of the indigenous population. Fields were abandoned, prairies were abandoned, no clearing of land by fire anymore. Billions of new trees grew thus in the Americas capturing CO2, cycling green water, increasing evaporation, sowing wind and making rain. The re-growth of forest changed in that periode the climate faster than ever in the history of man.

Sequestering carbon in soils is laudable, though it only has a significant impact if at the same time plant growth and plant coverage of the continents is increased. Biochar may be part of the solution but only if we increase simultaneously the production of biomass eventually being carbonized. Reforesting degraded land, reforesting the steppes and deserts, planting the cities, greening the roofs and side strips, growing plants in offices and factories, and using all available space to capture atmospheric carbon.

Photosynthesize : Carbonize
and only then will biochar become a seed for life and for saving the planet. 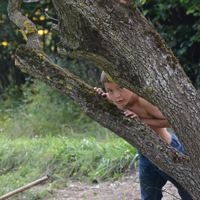