Biochar that was produced at pyrolysis temperatures above 550°C and presenting a molar H:C ratio below 0.4 is highly persistent when applied to the soil. 75% of such biochar carbon consists of stable polycyclic aromatic carbon and will persist after soil application for more than 1000 years, independent of the soil type and climate. The remaining 25% of the biochar carbon may be considered semi-persistent, presenting a mean residence time in soil of 50 to 100 years, depending on soil type and climate. Soil-applied biochar contains thus two distinct carbon pools with different degrees of permanence and therefore has two different carbon sink values. The climate service obtained from the stable fraction of biochar (75% of the C-content) can be considered of equal permanence as geological storage (e.g., DACCS, BECCS, Enhanced Weathering).

Biochar is a heterogenous carbonaceous material (EBC, 2012) that consists of two distinct carbon pools with different degrees of persistence when applied to soil:


In the environment, each of the carbonaceous compounds separated in those two respective carbon pools shows distinct degradation dynamics that can be described by an individual degradation curve. If biochar is incubated for one or two, or even eight years, as done in controlled incubation laboratory studies (Kuzyakov et al., 2014; Lehmann et al., 2015) and the resulting degradation data are then mathematically extrapolated into the far future, the prediction of the degradation dynamic is erroneous because it assumes that (1) the biochar consists only of semi-persistent carbon pools (aliphatics and small clusters of aromatic and heteroaromatic rings) and (2) the exponential biological degradation model is valid, despite degradation mechanisms being rather physico-chemical than biological. Over a time scale of several thousands of years, persistent aromatic carbon moieties may eventually also be degraded (Bowring et al., 2022), but this fact is barely contained in degradation data measured only during the first decade after biochar was incubated in soil. 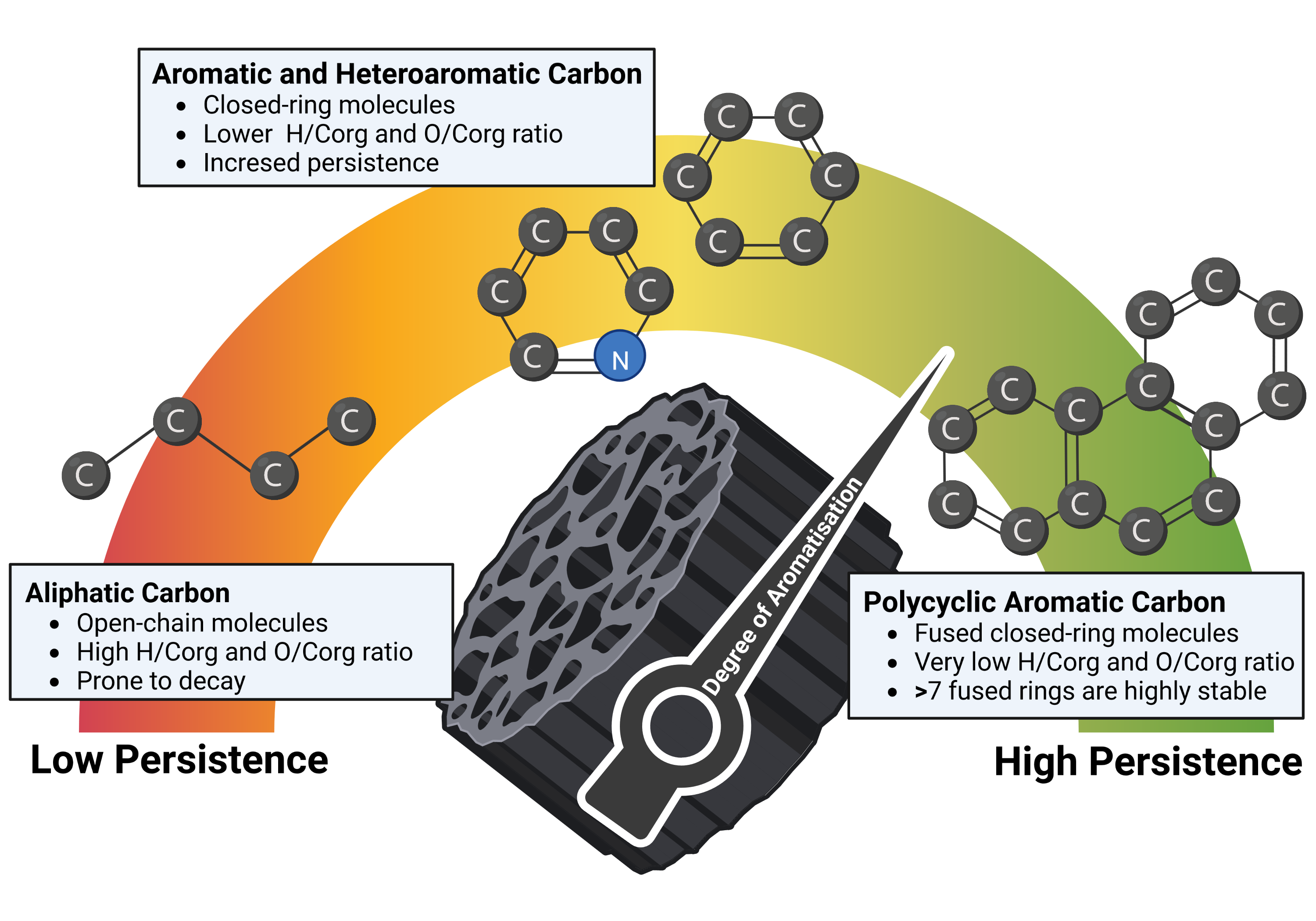 All biochar incubation studies observed that the rate of degradation slows down exponentially with time and that the experimental data can be fitted mathematically with bi- or trimodal decay functions (Lehmann et al., 2015; Wang et al., 2016; Zimmerman & Gao, 2013). However, such mathematical fitting may be misleading as it cannot account for qualitative transitions (e.g., removal of physical protection of compounds inside the biochar structure) occurring decades and centuries after the latest measured data points. As shown by Lutfalla et al. (2019), the small number of existing data sets presenting decadal degradation data of carbon in soil cannot be fitted by such bi- or trimodal decay functions. Therefore, projecting the degradation behavior of the semi-persistent carbon pool onto the degradation curve of the entire biochar is not adequate and biases our understanding of long-term carbon dynamics.

The percentage of PAC in a given biochar depends mainly on the pyrolysis conditions (i.e., temperature, residence time, heating rate, particle size, carrier gas, pressure) but also on the feedstock characteristics (i.e., lignin and ash content of biomass) (McDonald-Wharry, 2021). The PAC content can be quantified by hydrogen pyrolysis (HyPy) (Ascough et al., 2009; Rombolà et al., 2016) or by Raman spectroscopy (McDonald-Wharry, 2021; McDonald-Wharry et al., 2013). HyPy analysis is reliable and proven but too complex to be utilized in commercial labs and thus too expensive to be used in routine analysis as for example, in the EBC certification process. Raman spectroscopy as well as the newer Mid-Infrared or Rock-Eval methods, are more cost-efficient analytical methods and are currently under methodological evaluation for the EBC.

Other parameters of biochar, such as production conditions (e.g., temperature) and elemental composition (i.e., using molar H:C and O:C ratio), which are frequently used as proxies for the degree of aromatization rely on poorly constrained databases with low analytical quality. The dataset used e.g., by Woolf et al. (2021) and the IPCC (IPCC, 2019) to calculate biochar persistence based on the highest treatment temperature (HTT) and H:C proxies, contained only one biochar series where HTT was actually measured (Budai et al., 2014) all other temperatures were estimates. Pyrolysis temperature, i.e., the actual temperature inside the biomass particle during conversion, cannot be measured accurately in most industrial pyrolyzers and does not capture the effects that heating rate, residence time, particle size, and pressure have on the formation of PAC (Santín et al., 2017). Moreover, when using literature data on H:C to parameterize mathematical functions on biochar persistence, more care needs to be taken to only use correctly analyzed carbon and hydrogen contents of materials that are really biochar. The IPCC (2019) and Woolf (2021) included e.g. many materials with H:C ratios above 0.7 which are clearly not biochars (EBC, 2012; IBI, 2015) and considered implausible data resulting from insufficiently described analyses (e.g., how was the biochar dried before measuring the H-content). While the molar H:C ratio can be measured with sufficient precision, some fractions of biochars with low H:C are not necessarily PAC and may be considered semi-persistent only (Howell et al., 2022). The H:C ratio is thus a proxy with limited significance for the quantification of biochar persistence.

Since PAC is not yet analyzed for every EBC-certified biochar, average biochar data from the literature should be used with caution. Conservative security margins must be used to estimate the persistent biochar content and, thus, the portion of biochar carbon that will endure as a C-sink for more than 1000 years. Based on the degradation experiments published so far and considering that the calculated decay functions express only the degradation dynamic of the semi-persistent biochar carbon pool, the carbon calculated as remaining after 100 years is regarded as the minimum PAC fraction of biochars with an H:C ratio < 0.4. Applying the conventionally assumed average degradation rate of 0.3% per year, the 74% of carbon remaining after 100 years (Camps-Arbestain et al., 2015; H.-P. Schmidt et al., 2020) can be considered PAC. This corresponds well to the experimental data presented by Howell et al. (2022), finding 75% stable polycyclic aromatic carbon for various engineered biochars with H:C ratios below 0.4 using the HyPy quantification method. Biochars with H:C ratios above 0.4 are likely to have a distinct labile carbon pool of incomplete pyrolyzed biomass or condensates that may become subject to more rapid biological degradation. Dedicated research for those materials is needed to assess the persistence of pyrolyzed biomass presenting high H:C ratios above 0.4 (Pulcher et al., 2022).

Fig. 2: Sequestration curve of a 1000 tons carbon sink made from soil-applied biochar with an H:C ratio below 0.4. The persistent aromatic carbon (PAC) pool presents 750 t carbon that will remain over more than 1000 years in the terrestrial system. The semi-persistent carbon (SPC) pool has a minimum MRT of 50 years and was modeled on a bi-modal exponential decay function. The complete SPC decay occurs over 350 years. Thus, the total carbon sink decreases to 87.5% after 50 years and reaches the stable PAC plateau of 75.0% of total pyrogenic carbon after 350 years. The decay function is
〖Total PyC〗_((x))=a*e^((-kf*x) )+b*e^((-ks*x) )+P
with a = 45.423, kf = 0.513, b = 212.007, ks = 0.009448, P = 742.5 nd x = year after soil application. The decay curve of the semi-persistent carbon pool is an approximation covering multiple discrete (physical) degradation events rather than a continually harmonious decomposition.

To the best of the current scientific knowledge, it is safe to assume that biochar with an H:C ratio below 0.4 can be best described by a 2-pool-model presenting

Calculations of global inputs and deposits of naturally produced pyrogenic carbons (PyC) can attest to how robust and conservative the assumption of these average persistence rates over 100 years is. Forest, bush, and steppe fires are examples of incomplete combustion, which transform part of the biomass into chars, i.e., PyC. According to recent surveys of natural fires, 5-15% of the biomass carbon involved in the fire is converted to PyC (Santín et al., 2016). Natural PyCs are similar in structure and material properties to industrially produced biochar. However, it can be assumed that the stability of high HTT industrial biochar, and thus the mean residence time (MRT), is even higher than that of natural PyC (Howell et al., 2022; Santín et al., 2017) due to more controlled and homogeneous high-temperature conditions.

Hilscher, A., & Knicker, H. (2011). Degradation of grass-derived pyrogenic organic material, transport of the residues within a soil column and distribution in soil organic matter fractions during a 28month microcosm experiment. Organic Geochemistry, 42(1), 42–54. https://doi.org/10.1016/j.orggeochem.2010.10.005 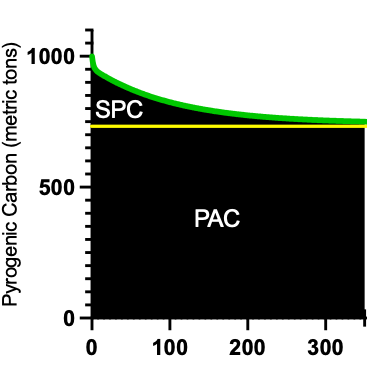