Septic Systems and Cesspools as C-sinks

Make carbon sink, not rise. Most of the world’s toilets are not connected to sewers but drain into septic systems or cesspools. With new smart biochar based septic designs, this human derived waste carbon could become long term carbon sinks. Refashioning our subsoil waste disposal into safe systems of carbon sequestration could open up vast new opportunities for the circular urban economy and climate action.

The need to find large reservoirs for carbon storage is heating up exponentially. While some Carbon Dioxide Removal (CDR) technologies are targeting deep crevices into which CO2 can be injected, biochar has historically focused on additions just below our feet, particularly in carbon-depleted or contaminated agricultural soils. Few that deeply understand biochar would argue against its use on farms, though more than a few argue against its use anywhere else! However, getting farmers to adopt new practices is notoriously challenging and slow, even when the value proposition looks favorable.

The stark climate reality is that we do not have the luxury of time on our side to solely focus on persuading vast numbers of farmers to bury carbon. The biochar industry has spent more than a decade focusing on farmers and has barely put a dent in that market. This is not to say we should give up on it. It is obvious that we cannot and should not. But if biochar is to have a material impact on climate change in the short time frame that is necessary, vast new sinks must be identified quickly. 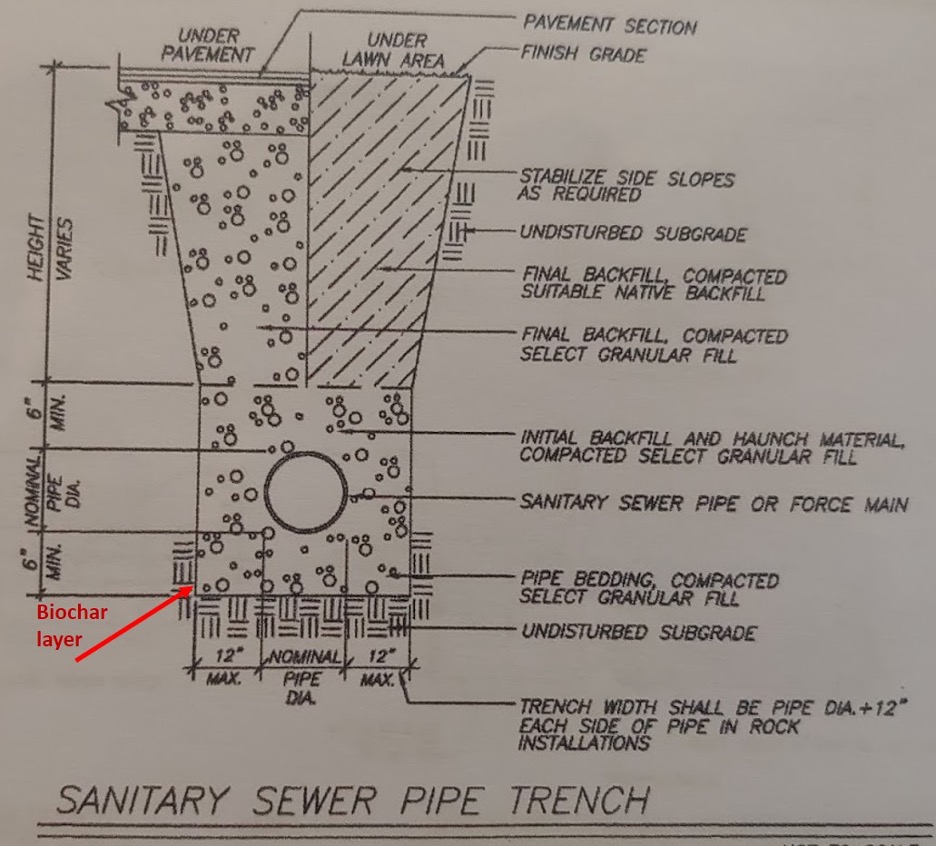 Fortunately, there are a growing number of not only safe but beneficial sinks that could provide enormous sequestration opportunities. [Albert Bates and I explore many of these in BURN.] One such opportunity could be upgrading the lowly cesspool, a primitive system used to manage toilet waste, as well as the improved but far from optimal septic system. Cesspools, though largely now banned in the US and Europe, continue to exist in rural areas around the world and cause significant issues as they are often a primary source of Nitrogen pollution and usually contain coliform bacteria (e.g. E.coli), phosphates, chlorides, chemicals and viruses (e.g. the novel Corona virus may spread through human feces) which contaminate groundwater or local water bodies.

Cesspools or cesspits come in various types but are basically a drywell for untreated household waste, including human feces. In some rural areas and even suburban areas these are still common. Long Island still has 250,000 cesspools and 110,000 septic systems in need of upgrading or replacement as these are largely responsible for the increase in algal blooms, fish kills and beach closures. Local municipalities have offered significant funds to homeowners to upgrade these leaching liabilities which have harmed the local economy.

The renewal or replacement of cesspools and septic systems may become a huge opportunity for the establishment of carbon-sinks. Septic systems are perhaps an even greater carbon sink opportunity as they are far more common and typically much larger. Though they are an improvement over cesspits, they too are responsible for significant water contamination.

A properly designed septic system often involves moving around large quantities of soil, sand and gravel to improve infiltration and filtration. However, septic systems seem to work indirectly on the principal of ‘dilution is the solution’ versus actual filtration. Soils with poor percolation are amended with vast amounts of sand and gravel to improve infiltration of rain water. The majority of this filtering materials is, strange as it sounds, placed above the area where the effluent is released into the soil. This set-up allows rainwater to percolate and prevents effluent from backing up and pooling at the surface. Drain pipes with holes at the bottom are typically sandwiched into a gravel layer which sits directly atop the subsoil (to where the effluent is then diluted and may contaminate ground water and even surface water). Adding a filtration layer of biochar below the drain pipes could help immobilize or neutralize contaminants of concern.

Using biochar for a septic system for private construction

In perhaps the first residential use of biochar in a septic system, I recently worked with a civil engineer and excavator to design a shallow trench septic system that included biochar. Since biochar is not currently an approved soil amendment for drain fields, we had to design it so that it could still pass regulatory muster. This was done by digging deeper trenches upon which biochar could be added before the gravel, sand and topsoil. Before trenches were dug, sand was used to create a raised bed. In this design roughly 10 cm of biochar was applied to 5 trenches measuring 18m in length for a total of one ton of biochar. Drainpipes with holes near the bottom were sandwiched in between 30 cm of gravel then covered with a geotextile to prevent soil from clogging the gravel. Finally, 30cm of topsoil was layered above the geotextile. Adding a layer of biochar beneath the gravel and pipe enhances adsorption and biological degradation, though in this demonstration measuring results will be quite a challenge. 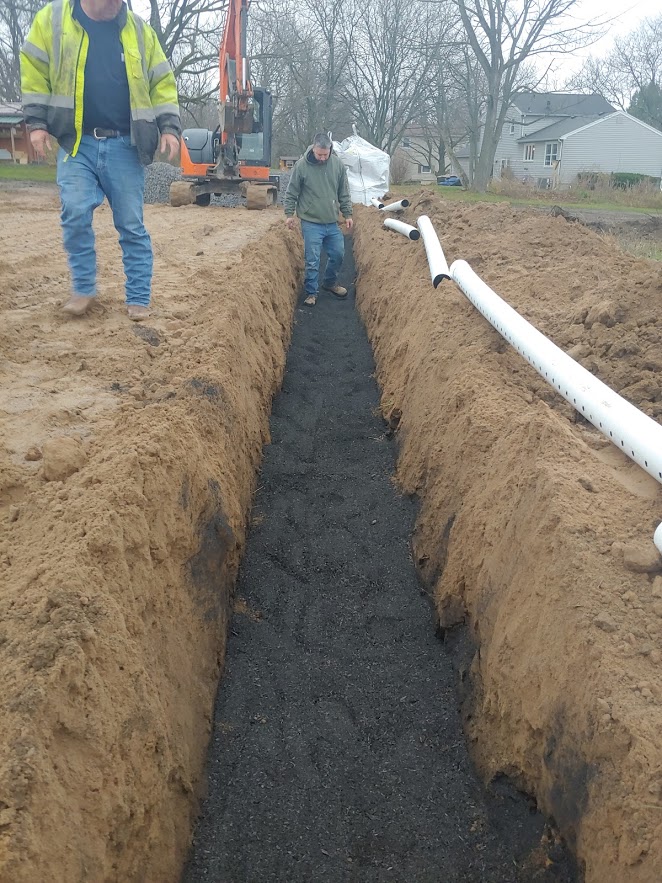 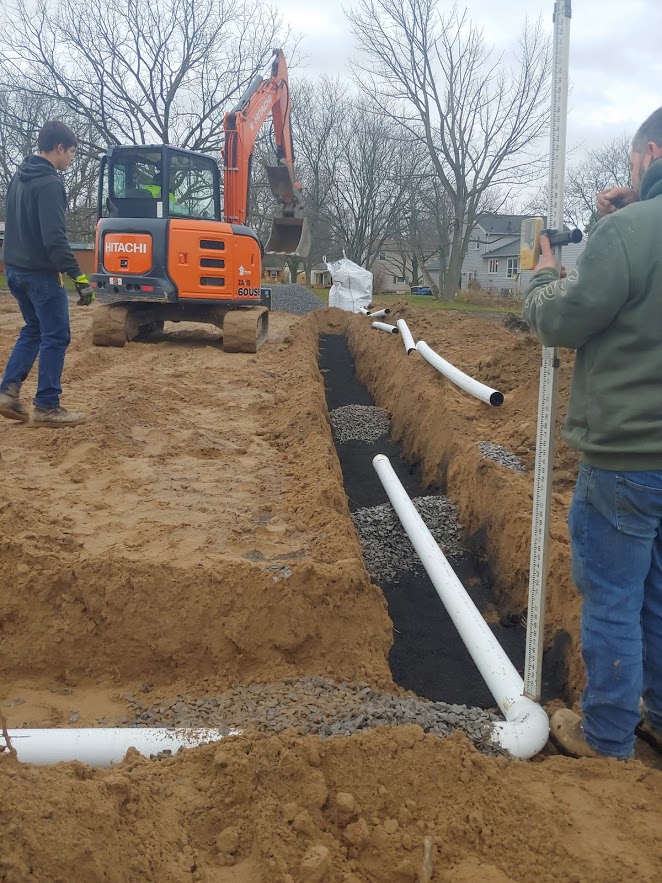 Image 2&3: Setup of the septic biochar system where the biochar bed is placed below the sewage drainage pipe. Sand and gravel is then placed above.

This was a small system yet it still required 8 truckloads of sand (200t) and 2 truckloads of gravel to be hauled in. Larger homes often required three times as much sand in areas with heavy clay soils.  Mixing far larger quantities of biochar into the sand and/or gravel layer, might allow for 50 – 100 tons of biochar per septic system. In addition to the drain fields, it could be used around the septic tank and in the trenches connecting the septic tank to the home and to the distribution box which lies between the septic tank and the drain field lines and serves to distribute effluent evenly. Similar structured soils have been successfully used in the Stockholm Biochar Project. Storm drains, bioswales, retention basics, detention ponds, rain gardens and dry creeks could also benefit from the addition of biochar. Biochar could even be used as an additive to make the concrete septic tank, the PVC pipes and the geotextile used in the septic system!

Municipalities could potentially fund cesspool upgrades or out of date septic systems using carbon financing. Imagine replicating the Stockholm model where the city converts green waste into biochar. The municipality could sell the carbon removal credits and use both the funds and the biochar to upgrade the leaking systems. This would have the added advantages of creating large-scale, local demand for biochar while also helping cities to manage their organic materials more economically.

Municipalities might consider retaining the rights to the amendments so that they could remove them after a decade or so and use the enriched structured soils to rebuild coast lines or for urban tree planting. In theory, the biochar septic system could be set-up like a sort of “night soil aging” though the economics would be hard to predict and municipalities would be content, probably, with the assessment of the added carbon sink.

The biochar for my homebuilding demonstration project was supplied by National Carbon Technologies using sustainably sourced wood and had a carbon content >90%. One ton of biochar would have 900kg of carbon. Based on experience from calculations using the EBC-Sink methodology, an average carbon to CO2 multiplier of 2.5 could be used to convert the carbon to CO2e.  This takes into consideration the emissions related to feedstock production, chipping, transportation, pyrolysis emissions and other factors. The current carbon removal price is north of $60 per ton CO2e, so this single ton could generate $US 150 per ton of biochar. Now imagine being able to put 50 – 100 tons per residential system. That would generate more than enough funding to install higher performing, healthier sewage management systems. In Long Island alone this could lead to 18 – 36 Million tons of biochar being utilized which equates to carbon sequestration of between 45 Mt – 90 Mt CO2eq! Now imagine this model being rolled out across a good part of the planet. This is the scale that is needed to make a material impact on climate rebalancing.

To date little, if any, formal research has been done on this topic. Understanding the role of biochar’s particle size, friability, water holding capacity and adsorption potential would be helpful to understand if certain biochars are superior to others in this context and how much is needed for an average household of six persons. Determining what blends of biochar, sand and gravel work best in different soils and climates would help in developing best management practices needed for regulators and system designers. Designing a cost-effective circular economy model for carbonizing urban green waste and blending it into reusable structured soils for cesspools and septic systems would be a game-changer when it comes to creating multi-beneficial sinks. 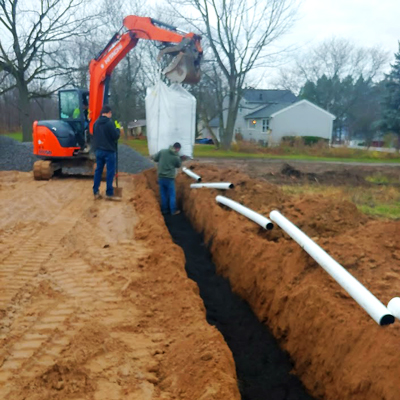 Septic Systems and Cesspools as C-sinks

Kathleen Draper is the  Board Chair of the International Biochar Initiative (IBI) and US Director of the Ithaka Institute in Rochester, NY. The Ithaka Institute for Carbon Intelligence, is dedicated to research, education, and consulting related to closed loop biochar solutions which can be implemented in both the developing and developed world. They are the editors of the Biochar Journal and the developers of the Kon-Tiki Kiln, biochar plasters, and sustainable packaging made from biochar.